Gaudi began this ambitious project near Barcelona in 1898 but only the crypt was finished between 1908 and 1916. Nevertheless, this is one of the architect's most studied and admired works and a precedent for many of the solutions used in the church of the Sagrada Familia.

The great expressive strength of the crypt is the result of a series of innovative features in the structure along with the audacious use of constructive elements, years ahead of its use in modern avant-garde architecture.

This restoration caused various manifestos in Spain and Europe.

In a restoration of this importance, one should have acted with the maximum of humility and criterion.
The restoration of a historical building is something very complicated, it is not only a problem of specialists, but of good taste. 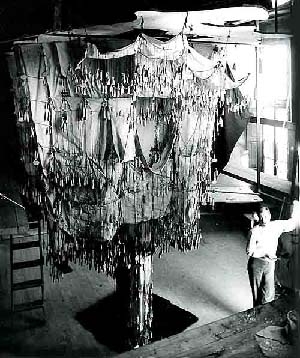 When the Count of Güell asked his friend Gaudi to build an original church in 1898 as the culmination of an industrial colony in Santa Coloma de Cervello. Gaudi, thought that he could study the constructive theory of balanced forces that he meditated for years for the great temple of the Sagrada Familia, applying a similar theme, but in smaller scale.

Thus, instead of starting out with paper and pencil, he thinks of a body model using ropes and pre-weighed bags of lead pellets, to obtain the balanced forms he had planned.
Ten years of research and trial and error to undertake construction, which began in 1908 and was suspended six years later, after completing only the crypt and porch. the results made him think a lot.
The funiculars of the model, the studied consciousness, were pillars inclined with an indisputable logic. The fact that these pillars would never have been used in the history of construction, he showed the importance of his model, unprecedented.
The crypt is attached to the ground by its back and outer walls, so invisible. Only the front supports are visible. Inside the crypt, the resulting columns have the tilt of the model and the thickness required by the associated loads.
At the center of the ship, impress with their expressive strength four basic basalt pillars and the capital of the same stone. The roof of the nave is supported by a system equivalent to the beams and beams of the arches of the current system.
The elements of the portico use the new theory a lot, the balanced forms become more visible and audacious than inside the crypt.